Cenotes in the Mexican Riviera 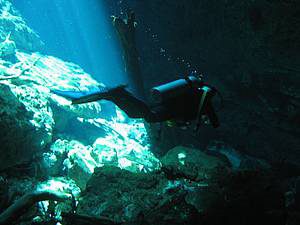 The natural wonders of the state of Yucatán are innumerable and some of the most important and unusual are the cenotes, or sinkholes. It is estimated that there are more than 6000, although only 2400 are registered.

The Mayas called them dzonot, which the conquering Spaniards translated as cenote. Geraldo Díaz Alpuche was a military commander in the 16th century who was greatly impressed with these underground caverns and pools, and he tried to explain the meaning of the word cenote in the Spanish language as meaning “deep thing”. The Motul dictionary, a dictionary of Mayan hieroglyphics, defines dzonot as “abysmal and deep”.   Cenotes are magical, enigmatic and unique in the world and were once the only resource for fresh, sweet water in the local Yucatecan jungle. They were the sacred places of the Mayas for that reason, but also because they represented the entrance to the underworld.

The Yucatán Peninsula is a porous limestone shelf with no visible rivers; all the fresh water rivers are underground. Being porous, caverns and caves formed where the fresh water collects – hence the cenotes or water sinkholes. The water that gathers in these subterranean cenotes is a crystal clear turquoise color with a very pleasant temperature of 78° F (25.5º C).   The stalactites and stalagmites that form inside the cenotes are true natural works of art. In many, holes in the ceiling allow the sunlight to filter into the cenotes, giving the scene a magical feeling. The cenotes of Yucatán are a natural treasure that should be seen by all, keeping in mind that they should be protected so that man does not destroy in a few days what nature took millions of years to create.

Arriving by air into Merida, think of the land of cenotes, geological cavities which vary according to their morphology; deposits of crystalline waters with a stunning kaleidoscope of natural light, and also, incidentally, which played a leading role in the development of the Mayan culture. Without cenotes, this enigmatic civilization would not have prospered, not to mention the religious significance that they played in their mythology, as the gateways to the underworld. When your plane touches down, only a few meters away from the runway are some of these natural wonders. The cenotes by the airport cannot be visited, as they are not open to the public, but the geography of the Penísula is full of them. Do not miss the chance to see the cenotes of Yucatán: pure magic!